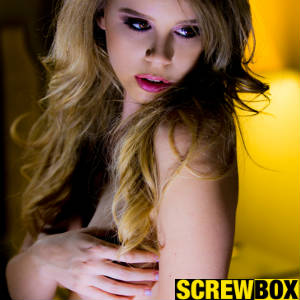 (Hollywood, CA) March 30, 2017 – In December, Screwbox.com members couldn’t get enough of blonde, naturally busty, naughty girl- next-door Alexis Adams’ solo movie Touch. They made it one of the top-rated videos on the site. Her need to touch herself over and over becomes an obsession and an extremely hot scene.

Now, Adams is appearing in Love & War, her first hardcore scene for high-end adult site Screwbox.com. At first, we see that Adams and Jessy Jones seem like soulmates, but Adams is fighting off Jones and his affections. The two literally go head to head and it quickly becomes a game of who’s the strongest and who will give into sexual mercy. Love & War premieres exclusively on Screwbox.com tonight at midnight.

“This film was unique to compose, because we selected talent who are naturally not aggressive,” says Owner/Creative Director Jakodema. “That being said, it was amazing to witness Alexis Adams’ transformation into a more dominant role; which complimented Jessy Jones’s sweet side. Their true interpretation of every day Love & War was genuinely expressed and carried well throughout the character’s personas.”