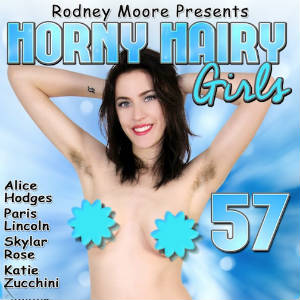 Hairy babes Katie Zucchini and Simone Delilah share a bed. Once they start to spoon to stay warm, the real action starts. Hairy hottie Juliette March makes Moore a protein shake at the gym and when she takes it over to him, he falls off the bike. She helps him to the couch, puts her hairy pussy in his face, and brings him back to health. And redhead Skylar Rose is a curvy and unshaven babe who lets Rodney dominate her, and the two have one wild ride together.

“Our fans can’t get enough of hairy girls and we’re lucky to have some of the best girls out there on our website and DVDs,” says Moore. “This DVD is a hairapalooza you don’t want to miss!”

Surfers who join Rodney Moore’s Mega Site, RodneyMoore.com get access to 12 incredibly sites and webmasters can profit by signing up for the combined RodneyBucks / SheMaleStrokerBucks affiliate program.