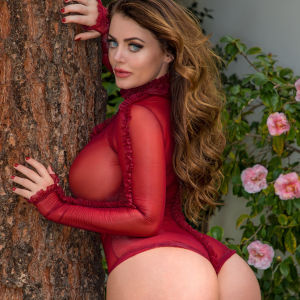 Fans of the buxom, blue-eyed beauty can get their hands on the star’s custom-made sleeve this holiday season by going to ShopDocJohnson.com, and first-time customers can take 10% off their purchase at checkout.

Dee’s namesake Stroker is contoured inside the sleeve with UltraSkyn for a smooth, realistic feel, with a squeeze plate for pressure control and an end cap to build intense suction, creating an extraordinary solo experience like no other.

“Just in time for the holidays, my Main Squeeze Stroker is the next-best thing to having me right there with you,” said Dee of the real-feel device, which warms up instantly to body temperature when in use. “There is nothing else like it, and I’d love to hear fans’ reactions to trying it out for the first time!”

Dee is also currently a larger-than-life presence on two billboards in Los Angeles, California – one on Sunset Boulevard, the other at LAX – in a promotional ad for YouTube personality Vitaly Zdorovetskiy’s new website VitalyUncensored.com, displaying her glorious assets alongside other top adult stars.

“We shot these amazing ads with Vitaly, along with Kleio Valentien, Tana Lea and Cherie DeVille, for his new subscription site, and it’s so cool to drive in LA, look up and see yourself on these huge billboards!”

Webmasters can profit from the team-up by signing up with the Doc Johnson Affiliate Program, or even promote the model’s own SophieDeeLive.com via Vicky Vette’s Sticky Dollars program.

The star is spending more time with her fans these days, appearing in live shows on the Fan Centro and Only Fans platforms while also acting in independent mainstream films (including Sony Pictures’ The Hungover Games, Danny Glover’s Bad Asses and Marlon Wayans’ A Haunted House 2).