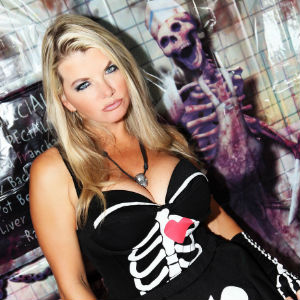 Fans can check Vicky’s Twitter and Instagram for exact showtimes and news over the weekend.  This is the second time Vette has appeared at the popular mainstream convention.

One of Adult’s best known stars, Vette was inducted into the AVN 2016 Hall of Fame earlier this year, as well as winning AVN honors for Best Solo Site of the Year for VickyAtHome.com. One of the most followed adult stars in the world, Vette is one of only three to ever star in a mainstream Indonesian horror movie (Sasha Grey and Tera Patrick being the only other two). Her appearance in that horror movie (Pacar Hantu Perawan or Virgin Ghost’s Lover – actually a sequel) was chronicled in Time Magazine due to Indonesia’s strict censorship of adult videos. Vette also starred in the Indie horror movie Fuckenstein, shot in black & white.

“If you are close to New Jersey… come out and see me, Sara, Sunny and the other adult stars at Chiller. It’s guilt free and you can go home with a GREAT cover story.”

Vette owns and runs popular VNAGirls.com Network, and plans on streaming live for members of her website live from the convention.

Webmasters can promote any and all sites of the VNAGirls Network, as well as use Vette’s appearance this weekend, by signing up at StickyDollars.com.

Vicky then heads to Edison New Jersey to appear at Exxotica, New Jersey, November 4-6 at the VNA Booth.