The Inked Awards Announces Winners at a Star-Studded Event 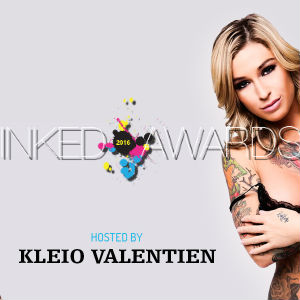 (New York, NY) November 8, 2016 – On Saturday night, the Inked Awards were held at the Hilton Garden Inn of the Raritan Center in Edison, New Jersey.

It all started with a purple carpet with media from around the world, complimentary hors d’oeuvres, and an open bar. Presented by Chaturbate, the event was well attended by adult stars, industry peeps, and fans.

Hosted by Kleio Valentien, along with MC Draven Star and Trophy Girls Anna Bell Peaks, Jas, and Catherine Tayler, the show was a huge success.

Both fans and critics cast their votes, and the winners are:

“We were amazed at the turnout – we had a packed house and every year the awards get bigger and bigger,” said Inked Angels owner, Jason Jones. “We’d like to thank our panel of voters, the fans, our sponsors, and everyone who supported us since the beginning. And of course, congrats to all our winners.”

As part of Inked Magazine’s sponsorship, the Starlet of the Year winner, Anna Bell Peaks, will get a cover and spread in Inked Magazine.

Media inquiries about Inked Angels and/or The Inked Awards should be directed to Erika Icon of The Rub PR at erika@therubpr.com.

About The Inked Awards

In 2012, the Inked Awards were born and have been an annual event ever since. The awards honor inked performers and people who support ink in the adult industry, many who are overlooked at other awards. The first three years were broadcast online via the awards website. 2014 marked the introduction of fan nominated and voted categories. Past winners include Bonnie Rotten, Juelz Ventura, Skin Diamond, Karmen Karma, Joanna Angel, Hailey Morgan, Tommy Pistol, Evil Angel Studios, and many others. 2015 was the beginning of a new era for the awards – they were held as a live event. The tradition will continue in 2016 on a much larger scale.