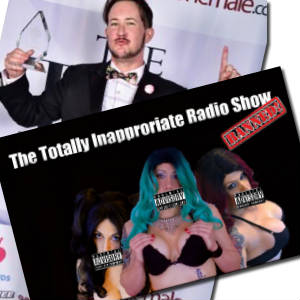 (Hollywood, CA) May the Fourth, 2018 – The Totally Inappropriate Radio Show is one of Demon Seed Radio Network’s top shows. Helmed by Kimber Haven, it’s co-hosted by Lexis Steel and Raven Roxx. And this week, they’re welcoming an extra special guest to the show… Eddie Wood.

“We’ve been wanting to have Eddie on for some time and when I saw him at the TEAs and the after party, we set a date in stone,” says Haven. “I’m sure we will have a lot to talk about and the girls and I are very excited he’s our guest this week. If you’re not already a fan of his, you will be after you hear Eddie on our show.”

Tune in Saturday, May 5th, at 3pm PST/6pm EST to http://www.demonseedradionetwork.com/ for the live two-hour show. Listeners can interact with the hosts during the broadcast on their new live chat feature on https://tiradioshow.com/, where listeners can also catch up on all the shows,  or watch video footage on the Totally Inappropriate Radio Show YouTube channel https://www.youtube.com/channel/UC3g9YL2JCLR9fErZ1ZSTrIg.

Webmasters can promote Haven’s award-nominated KimberHaven.com by signing up to her official ModelCentro affiliate program, and keep up with Wood at his own EddieWoodXXX.com

Kimber has made quite a name for herself and you can see her scenes on Grooby sites and DVDs, WendyWilliams.com, Shemale Strokers, Sexpose TV, and her ModelCentro site Kimber’s Playroom. She spends a lot of time camming on Chaturbate and lighting up the stage featuring dancing and doing stand-up comedy. In 2016, she started her production company Bad Girl Mafia Productions and garnered her own weekly radio show, The Totally Inappropriate Radio Show, on The Demon Seed Radio Network with over 200k listeners worldwide each week.

Keep up with everything Kimber by joining her site Kimber’s Playroom http://kimberhaven.com and Only Fans https://onlyfans.com/Kimber, buy her clips on Clips4Sale https://www.clips4sale.com/studio/105674/kimbers-playroom, and spend quality time in her Chaturbate room tskimber.com. Follow her on Twitter @kimberhaven and Instagram @tskimberhaven, and like her Facebook Page at https://www.facebook.com/Kimber-Haven-656981584403857/.