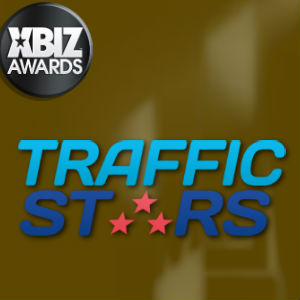 (LOS ANGELES) – TrafficStars has been named a finalist nominee for the adult industry’s awards event of the year, the 2017 XBIZ Awards, presented by MyFreeCams.com, scheduled for Thursday, Jan. 12, in Los Angeles.

TrafficStars has received a nomination in the award category Traffic Services Company of the Year – Europe.

Nominees for the 2017 XBIZ Awards were selected based on nearly 8,000 pre-nominations submitted by members of the industry through XBIZ.net.

“For us it’s an honor to be nominated for this award after launching TrafficStars in such a competitive environment. This is the cherry on top of a spectacular year, where we grew by 100%, signed amazing partnerships and managed to bring together such a talented team”, said Geoffrey Bonnechère, TrafficStars CEO, who was also nominated for the CEO of the Year category of the XBIZ Exec awards.

The XBIZ Awards honors the very best in the business of sex and is set to fill the largest ballroom in Los Angeles – the Westin Bonaventure Hotel – where adult film legend Ron Jeremy will be featured as master of ceremonies for the red-carpet gala.

A star-studded affair that attracts the industry elite, the XBIZ Awards show, celebrating its 15th anniversary in 2017, recognizes outstanding achievements across every facet of the multibillion-dollar business, including movie production, pleasure products, technology and retail.

Since its inception, household names from the world of adult have hosted the gala, including Jenna Jameson, Tera Patrick, Jesse Jane, Jessica Drake, Kayden Kross and James Deen. Its worldwide reach has led to international media coverage from renowned outlets such as the L.A. Times, CNBC, TIME, Cosmopolitan, New York Magazine, Huffington Post and The Daily Beast, among others.

The XBIZ Awards will once again coincide with the industry’s trade events series of the year, XBIZ 2017, which annually features an unparalleled lineup of guest speakers and special events dedicated to exploring the future of the adult industry.

For the complete list of finalist nominees, visit XBIZ.com.

TrafficStars is a self-serve proprietary ad network which was developed to provide technical and marketing solutions to online advertisers and publishers worldwide. Founded in 2014, TrafficStars has offices in Limassol and Barcelona and manages nearly 1 billion highly targeted ad impressions daily and growing continuously.

For more information, visit TrafficStars.com, register here or send an email to advertising@trafficstars.com.

XBIZ™ is the adult industry’s leading publisher of business news and information, providing up-to-the-minute coverage of the industry at XBIZ.com and in three trade publications — XBIZ World for the digital media market, XBIZ Premiere for the retail market and XBIZ Sensuals for the intimate products market. In addition, XBIZ hosts five annual trade events including the adult industry’s biggest night, the XBIZ Awards. XBIZ is frequently cited in the media for coverage of the industry and has been published in CNN, Fox News, Newsweek, MSNBC, Forbes, The Wall Street Journal, Wired, CNET, ABC, USA Today and Los Angeles Times among others.