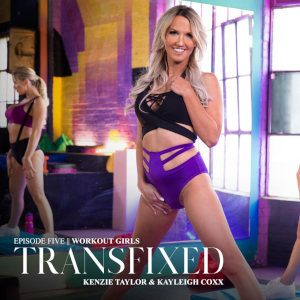 This original series sets a new standard in adult film; shot in 4K Ultra HD, each Transfixed episode is created in collaboration with the actresses themselves, to bring their fantasies to life and allow a space for them to explore and enjoy each other without stigma. The stories are inspired by references to iconic female figures and classic feminine tropes throughout history, film, literature, and pop culture, from Little Red Riding Hood to Thelma & Louise.

Transfixed is not only attracting a new generation of viewers that formerly regarded TS erotica as taboo, but also entertainers who want the opportunity to work and be seen on a premium platform like Adult Time.

Mills says she is glad to be of service.

“I hope it will provide a stage for even more adult performers who are interested in shooting this kind of premium content.”

The show’s fifth episode, ‘Workout Girls’, starring Kenzie Taylor and Kayleigh Coxx, is available now – a private exercise class that gets sweaty and steamy before the real action begins.

Follow @transfixedcom and @Adulttimecom on Twitter for more info and production news, and join AdultTime.com to watch the full series, with included access to over 50,000 scenes from Gamma Films’ full library of award-winning brands.

No spam, notifications only about new products, updates.
PrevPreviousBrenna Sparks Has a Sex Life Solution in Her Blacked Raw Debut
NextVoting is Live for the 2019 AltPorn Awards WinnersNext
On Key