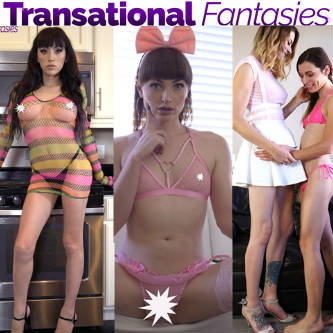 (Chatsworth, CA) December 20, 2017 – Mancini Productions has announced that their flagship website, domain name and DVD series, Shemale Strokers, will be rebranded as Transational Fantasies. The new, inclusive name now resonates with what are considered to be appropriate and acceptable terms in the adult industry for trans models.

When the transgender erotica genre began to gain popularity in the 2000’s, companies used words that are no longer viable today.

“Trans descriptive words that were previously acceptable – including our domain name – are now considered to be slurs,” said company owner Sammy Mancini.

“While several years ago we removed those terms completely from our websites, the actual names of the websites are brands that are difficult to change for a variety of reasons,” Mancini explains. “However, in the interest of standing by our friends and peers both in the trans adult and LGBTQ communities, we are in the process of changing the names of our sites and DVD titles.”

“We’re very happy with the new name, Transational Fantasies,” said Mancini. “I have always been story and fantasy driven when producing our content, and I feel this name reflects more accurately the experience our customers and fans get when watching our scenes. We give them the chance to imagine that they are realizing their fantasy with their dream girl, instead of just watching a model have sex with someone else.”

Over fifteen years ago, Mancini was one of the first directors to shoot trans girls in video – not just photographic – web content. His “girl next door” approach to producing transgender erotica became very popular, very quickly. As Mancini describes, “I focused on the girls’ personalities, telling their stories of their transition and the daily lives. Plus, stories of their hot encounters with lucky partners. You get to know the model before viewing her naked. This was a lot different than what was out at the time.”

Mancini’s humble and gracious persona reflects how he feels about the women he directs.

“Not only is it an honor to have worked with all the beautiful and unique models along the way – but to be able to present a site that I am proud of to the fans of these beautiful ladies makes it an even greater honor.”

Today, Mancini’s style sets the standard for what audiences expect in authentic, intimate experiences with their favorite trans girl porn stars, as well as plenty of fresh-faces. Models consistently praise his innovative and artistic vision, which usually includes a sexy storyline tailored around the fantasies and kinky fetishes of the performer herself. What’s more, Mancini is an expert at capturing their beauty and essence in film and photography. Known for his exceptional knack for discovering new talent, he has shot all of the top names in the industry – and often times, he was the first. Mancini was honored recently at the Trans Erotica Awards show with the coveted “Lifetime Achievement” award.

Webmasters can profit from the very lucrative market by promoting Transational Fantasies and membership to four incredible sites, including BlackTransWhackers.com, BangMyTransAss.com and BrazilianTransGirls.com, for one low monthly price at TransationalFantasies.com, by joining the AdultEmpireCash affiliate program.

After receiving an old VHS camera as part of a payment for writing a jingle for a video store in 1991, musician Rodney Moore tried his hand at shooting pornography, with no intention of making a career out of it.

In 2002, under the name Sammy Mancini, Moore began shooting transsexual adult movies and opened one of the first (if not first) websites to offer video content. Ten years later, Sammy Mancini was given the Lifetime Achievement Award at the 2012 Transgender Erotica Awards (TEAs). According to Mancini, “We are dedicated to being one of the best (if not the best) Trans Women adult sites in the world with 100% original content and frequent updates.”