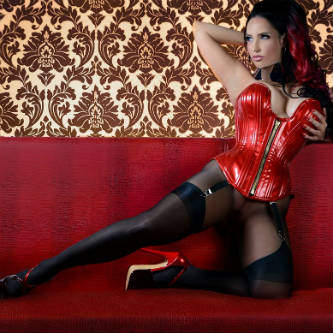 Sinical is known for it’s classy take on high-end fetish fashion and couture, and routinely features the biggest names in fetish. The latest issue features a photo spread from an exclusive photoshoot with RubberDoll, as well as an insightful and entertaining interview. For a limited time, you can order a personally autographed copy of the magazine at RubberDollShop.com.

“It’s an honor to be featured on the cover of such a long-standing high-end magazine that’s important to the fetish community,” says Rubberdoll. “The pictures and exclusive interview are sure to please my fans.”

This Thursday December 21, Rubberdoll appears for one night only at Firehouse 5782 Portland Road NE Salem, OR 97305 (503) 393-4782 (FirehouseSalem.com) and then Friday and Saturday, December 22 and 23 she heads to Sunset Strip 10205 SW Park Way, Portland, OR 97225 (SunsetStrippdx.com). She will be available for lap dances, pictures, autographs and will have product on hand.

“Firehouse and Sunset Strip are my last show of 2017 and Christmas weekend,” says Rubberdoll. “If you are anywhere close to Porland or Oregon come out and meet me! I’m planning very festive shows!”

Rubberdoll is also proud to announce she has been nominated for the first time ever as Webstar of the Year at the upcoming XBIZ Awards in Los Angeles. The nomination recognizes her strong web presence in the fetish community. Her personal website, RubberDoll.net, and her popular social media accounts have helped spread her latex lifestyle around the world and have turned her into one of the most sought-after fetish performers in the business. Rubberdoll’s Official Site was recently completely overhauled and is now part of the VNA Girls network, which has only increased it’s reach and popularity. Fans can vote for Rubberdoll here: http://bit.ly/2omVkJU.

“It’s such an honor to be recognized by XBiz!” said Rubberdoll. “I have been sharing my love of latex and my kinky lifestyle on the web for over 15 years and it’s been such an amazing experience to connect with so many interesting and pervy people. 2017 has been an amazing year. 2018 is shaping up to be even bigger!”

Fans who cannot make it to Rubberdoll’s feature events around the country can meet her online at her next members-only show, scheduled for January 9 (free for members of Rubberdoll.net). Rubberdoll has a Holiday Special at her Official Site, where for a limited time fans can join for $19.95 using this special link: http://bit.ly/2gZpkZC.