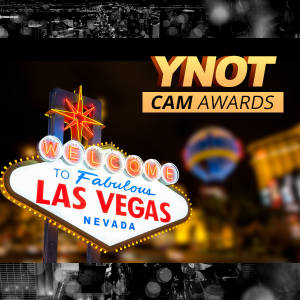 (Las Vegas, NV) October 26, 2017 – Camgirls rule the internet. In January 2018, they’ll also rule Las Vegas for one spectacular night when the first YNOT Cam Awards gala celebrates the best of the best in the business.

Produced by YNOT Events, the same entity that produces the YNOT Awards for the business-to-business sector of adult entertainment, the YNOT Cam Awards will bring stunning women from all over the world together in the adult entertainment capital of the world for an unforgettable evening of camaraderie and applause. From saucy Latina sizzle to American girl-next-door fireworks to sultry Eastern European heat and everything in between, each cam model has her own unique style. They’re all fascinating. They’re all passionate. And they’ll all be in one place for the most dazzling ceremony of the year.

“Webcam is the present and the future of adult entertainment, and it’s driven by models,” said YNOT co-owner Jay Kopita. “It’s time for an event of this magnitude to honor the entertainers, individually and as a group.”

“The 2018 YNOT Cam Awards intend to highlight the new roles women are playing in the adult entertainment business and to celebrate women in a way that hasn’t been done before by our industry,” he said. “We want to evolve the narrative around adult entertainment, and you’ll see that everywhere from our mission statement right down to the categories themselves, which avoid tired, old-school industry clichés that categorize women into body parts and niche stereotypes.”

In keeping with YNOT tradition, the gala will be posh, thanks to the generosity of platinum sponsors ImLive, Chaturbate and Studio20. Live entertainment? Check. Top-shelf food and drinks? Check. Red-carpet pre-gala festivities? Check.

The YNOT Cam Awards are hosted by YNOTCam.com, the lifestyle site for camgirls. Additional sponsors include Flirt4Free, iWantEmpire, Paxum and eXXXotica Expo.

For more information, visit Awards.YNOTcam.com. For sponsorship and reservations details, email Kopita or Skype him at LAJConsulting.

“Join us among the glitter and glitz of Las Vegas … and watch the cam stars shine.”