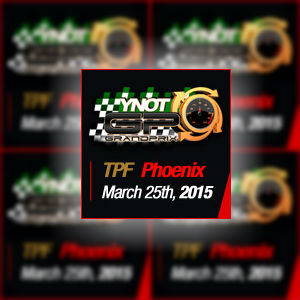 But Chris from hosting company Way3 has never claimed the coveted first-place trophy.

After 2014’s “sandwich” finish between Jorgen and Thomas, both on the PlugRush team, will 2015 be Chris’s year to come out on top? The finals are shaping up to be a major grudge match.

The YNOT Grand Prix, an official opening event for The Phoenix Forum, will take to the track at Octane Raceway beginning at 6 p.m. March 25. Though the competition among drivers is fierce, the atmosphere trackside is perfect for “chilling out and networking,” according to race organizer and YNOT Group LLC Vice President LAJ.

“The YNOT Grand Prix at The Phoenix Forum is always a favorite and well attended,” he said. “This is a new track — same company, but they moved to a new, even more awesome facility with electric karts, more straightaways and fewer turns. It’s quicker to get one lap on this track.”

Last year’s top three finishers fell short of the track record by less than a second. They’re already salivating about a faster race. The 1/3-mile raceway, specifically designed for its venue, is the only track of its kind in the U.S.: Each lap begins indoors, then speeds through an open-air section before zipping back inside.

According to LAJ, the track isn’t the only spectacular aspect of the Phoenix race.

“The catered Mexican food is fantastic,” he said. “Overall, the race is just phenomenal: networking, free transportation, driving and awesome food. You can’t beat it.”

Busses will begin transporting drivers and spectators from the Tempe Mission Palms Hotel to the raceway at 5:30 p.m. A few driver seats remain; contact LAJ to grab one.

The YNOT Grand Prix always has been a free event, thanks to the generosity of sponsors. This year’s hosts include JuicyAds, DatingFactory, BaDoinkCash, WellHello!, Dyn, FNCashand iCAN4Consumers.

Two additional races remain on the YNOT Grand Prix’s 2015 circuit: Qwebec Expo and The European Summit Prague. For information about sponsorship availability or to secure a driver’s seat at either or both, email LAJ, ping him at ICQ 92418228 or contact him on Skype at LAJConsulting.