YNOT Grand Prix Takes to the Track at AWSummit

YNOT Grand Prix Takes to the Track at AWSummit 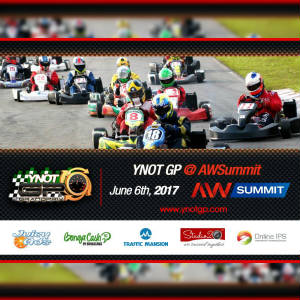 (Mamaia, Romania) May 28, 2017 – Webmasters will be able to feed their need for speed in Romania June 6,2017, when YNOT Grand Prix‘s 2017 circuit explodes from the starting line at AWSummit. This is the first time the adrenaline-fueled event has served as the official opener for the Romanian show, which will offer seminars, parties, networking and exhibits Aug. 6-9 at the luxurious, seaside IAKI resort June 6-9.

“We’re absolutely delighted to be included among the exclusive conferences that host the YNOT Grand Prix,” said AWSummit Chief Executive Officer Alexandra Praisler. “The event will create an even more relaxing business environment, and we’re expecting nothing but a great and fun rally. We’re grateful for this new partnership. We hope this is just the beginning and AWSummit will be a constant host for future YNOT Grand Prix and we will enjoy a very long-term, successful collaboration.”

The AWSummit staff made special arrangements for exclusive use of the track from 1:30 p.m. to 4:30 p.m. and will provide drinks and snacks popular in the region. As always, transportation and everything else are free for drivers and spectators, thanks to the generosity of AWSummit and sponsors JuicyAds, BongaCash, Studio 20, Traffic Mansion and Online IPS.

Now in its eighth thrill-a-minute international circuit, YNOT Grant Prix’s high-octane action is guaranteed to rev drivers’ and spectators’ engines. The international racing series awards trophies to the top three finishers at each event as determined by a final “death match.” Every year, component events in the U.S. and Europe provide participants with opportunities to network amidst fierce, but friendly, competition. The stakes are higher than ever this year: After the dust settles at the final race in September, the driver with the highest point total based on wins and finishes will receive a $1,000 cash prize. Check the leaderboard for rules and to see who’s at the head of the pack.

To secure a driver’s seat for the Romania race or the Sept. 14 season closer at the European Summit in Prague, email YNOT co-owner Jay Kopita or Skype him at LAJconsulting. More information about the races and sponsorship may be found at YNOTgp.com.

No spam, notifications only about new products, updates.
PrevPreviousBailey Brooke’s Mouth Of Bounty For The Month Of May: A Round Up
NextBrett Rossi Signs Exclusive with ArchAngel & Set to Direct 2nd Film for DeviantNext
On Key