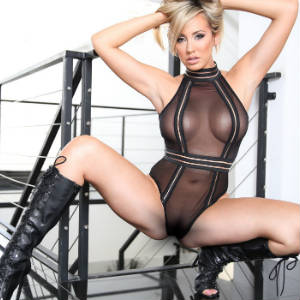 (Hollywood, CA) May 31, 2017 – Brett Rossi had a big week last week. She not only announced her exclusive contract with ArchAngel Productions, but also that she will be directing a second film for Deviant Entertainment.

Rossi has inked a deal with ArchAngel for all her interracial scenes through 2018. Her first film will be Ultimate Blondes 3. She’ll appear on the cover and have a scene with veteran male performer Prince Yahshua. Also appearing with Rossi in the IR title, set to release next month, will be Cali Carter, Kate England, and Kleio Valentien.

“I’m excited to be ArchAngel’s new Contract Star and be part of their team and family,” says Rossi. “The best thing about the partnership is that I can still film boy/girl and girl/girl for other companies. I’m excited to build a new fan base with ArchAngel and for my fans to see a different side of me. So, get ready!”

Last week, her directorial debut, Girl Crushed 2, was released and became an instant hit. The DVD featured the amazing cast of Lyra Law, Maddy O’Reilly, Abigail Mac, AJ Applegate, Tia Cyrus, Alix Lynx, Karlee Grey, and Rossi herself. Deviant Entertainment was so impressed with her directing abilities they’ve offered her another lesbian domination movie to direct. She’s currently casting for the film and will be heading into production soon.

No spam, notifications only about new products, updates.
PrevPreviousYNOT Grand Prix Takes to the Track at AWSummit
NextTrafficStars Launches RTB System and Integrates With EroAdvertising.Next
On Key