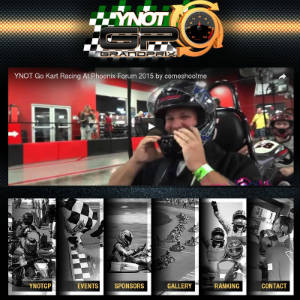 (Barcelona, Spain) February 21, 2017 – The YNOT Grand Prix will kick off its 2017 season March 4 when the adult industry’s championship kart-racing circuit opens the biannual The European Summit.

At stake: The season’s high-scoring driver will take home a $1,000 cash prize.

One of the most eagerly anticipated events at adult industry trade shows around the world, each YNOT Grand Prix takes over an entire indoor karting facility, offering fierce competition on the track and trackside camaraderie. Entry to the facility, equipment, food, drinks and transportation are complimentary, thanks to the generosity of sponsors including JuicyAds, BongaCash, Studio 20, Traffic Mansion and International Processing Solution.

“It’s an incredible track with many tight turns, a few fast straightaways, plus tunnels and ramps,” said YNOT co-owner Jay Kopita. “The Europeans are cutthroat racers, so like every year in the past, I’m expecting this race to be a to-the-death competition.”

For the second year in a row, drivers will compete for the $1,000 cash prize based on their season-long performance. The leaderboard updates after every race, reflecting drivers’ point standing. Each first-place finish nets the driver 10 points, each second place earns eight points and each third place takes six points. Finishers in fourth through sixth places receive four points each, and those who finish in seventh place through the remaining death-match field get three points each.

The grand prize, accolades and notoriety will be awarded at the completion of the circuit’s final race in Prague in September.

“The more races you participate and place in, the better your chances of winning,” Kopita said.

Heart-pounding racing action will commence March 4 at 6 p.m. and end promptly at 9 p.m. Buses will transport drivers and spectators from The European Summit’s headquarters hotel to the track at 5:30 p.m. and 5:45 p.m. Return trips will take place at 8 p.m. and 9 p.m.

Because so many drivers clamor to participate each year, “It’s important that people register by emailing me and that they get to the track on time so that we can finish on time,” Kopita said. “I’m expediting the process better this year and want everyone to get their heat determined at the beginning of the event instead of waiting in line to register.”

The first YNOT Grand Prix took place in September 2010 as a one-off promotion. Since then, the series has grown into an international grudge match attracting hundreds of speed demons and spectators. Two other stops will blaze through Phoenix on March 22 and Prague on Sept. 14. A fourth race will take place during a yet-to-be-determined show.

For more information about the YNOT Grand Prix, visit YNOTGP.com. To secure a seat as a driver or to investigate sponsorship opportunities, email Kopita or Skype him at LAJConsulting.