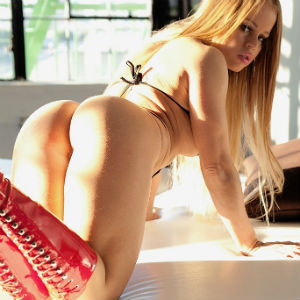 (Hollywood, CA) This week is another first for Spicy Latina Adult Star Nikki Delano – her first interracial scene ever is streeting this week.

Evil Angel’s “Lex’s Breast Fest #4” streets today and features Nikki prominently on the cover with a front and back view of her banging body.

Directed by Lexington Steele, he is the male talent in all of the scenes and the extremely lucky guy who got to pop Nikki’s interracial cherry.

“My fans have been asking me since I got in the biz almost four years ago to do an interracial scene,” says Delano. “I wanted to wait until the time is right, and I decided a few months ago to go for it. It was great to work with Lex – he made me feel very comfortable and was great to work with. I hope all my fans enjoy the scene.”

To promote the DVD and talk about what their scene was like, Delano will be making an appearance tonight on Lexington Steele’s brand new show Lexington Steele Live on L.A. Talk Radio. Watch Delano live from 8pm to 9pm PST/11pm to 12am EST on Channel 2 on latalkradio.com.