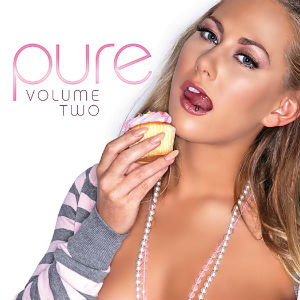 Art Koch of Nightmoves Magazine and All Adult Network gave Pure Volume Two a 4 out of 5, commenting, “Volume one was a real solid outing, and this follow up is just as powerful. All the girls are terrific, but one, Carter Cruise, really stands out… her scene shows just why Carter has all the tools for major stardom.”

“Pure Vol. 1 was so hot that Airerose Entertainment had to get a second volume to us as quickly as possible,” CaptainJack of AdultDVDTalk said. “Carter is a special talent in this industry. Everything she appears in turns to gold.”

Don Houston of XCritic gave Pure Volume Two a high rating of “Recommended,” citing covergirl Cruise as “the adorable blond babe many are whispering should be starlet of the year.”

“The interviews are a big part of what makes this movie for me,” Astroknight of AdultDVDTalk said. “[Director] Derek Dozer lets the girls take their time chatting about their sexual history and it really does give the movie a strong backbone.”

Blue-eyed bittie Cruise gives us a glimpse into her dirty mind before diving into the raw, uninhibited sexual skill that earned her a spot on the cover, as well as industry-wide recognition.

“With a perversion only surpassed by their deceivingly angelic looks, Ryder, Kay, and  Tyler round out this cast of nymphos, which are all sugar, spice, and all kinds of  ‘Nice!’.”

“It’s here! The sequel is the volume that turns the title into a series, and Pure 2 is everything you could want in a second edition,” Adam H., VP of Airerose Entertainment, said. “This is the movie that established our need for Carter Cruise as our official brand ambassador, and her performance is one of four passionate scenes fans will revisit again and again. Pure 2 is out now. Give us a call.”