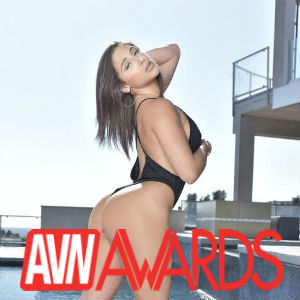 (Los Angeles) Adult entertainment superstar, Abella Danger, has had quite a year, starting 2016 by winning the Best New Starlet award from AVN. With Danger being one of the most sought-after starlets in the industry, it came as no surprise when AVN nominated Danger for 2017 Female Performer of the Year.

Could Abella be the first performer to win Best New Starlet and Female Performer of the Year back-to-back?

“Being nominated for 2017 Female Performer of the Year is a huge honor,” said Danger. “Although I feel like I’m still a newbie, it’s really amazing that AVN recognized my hard work by giving me a nomination. I’m really honored to be among that talented group of women and I wish them all the best of luck!”

Danger had nothing but glowing remarks about the people she worked with on her nominated scenes:

On DangerAss: “James Deen is my favorite person to have sex with and it was such an honor to have him do an entire movie on me, it was so authentic and raw, just so genuine.”

On her Abella showcase: “Shooting the showcase was pretty much the best experience of my life, I love Mason and she took such a huge chance with me, giving me that movie before I even won best new Starlet!”

The AVN Awards are set to take place on Saturday, January 21st, 2017 at The Hard Rock Hotel & Casino in Las Vegas. More information about the Awards can be found at http://avnawards.avn.com/.

AVN has also opened up fan voting. Fans can click here to register, voting is free, and votes can be cast daily.

Danger was also named Airerose Entertainment’s Brand Embassador in 2016, and a heavy concentration of her hard work can be found at Airerose.com; Webmasters can profit from her popularity and AVN Awards nominations (and awards) by joining the ButtBucks affiliate program.