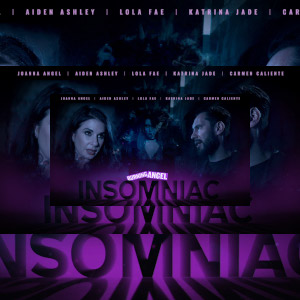 “I’m so proud of this movie. It’s dark and intense and once I came up with the idea (oddly enough – it came to me on a night that I couldn’t sleep) the whole thing kinda wrote itself,” said Angel. “The styling, the script and the editing all went hand-in-hand to create a truly dark and twisted rollercoaster, where you don’t want to blink and miss any second of it.”

Part One introduces viewers to Penny (Aiden Ashley) wandering the streets after another sleepless night: “I don’t sleep anymore, I just black out!” She runs into Angel, who offers her a lucrative opportunity behind the doors of a very private club. Penny’s first experience in the new underground world includes watching a wild three-way with Carmen Caliente, Lola Fae and Steve Holmes.

“Insomaniac couldn’t be any more perfect… it’s literally the best movie I have ever filmed – I was always lying when I said that about other movies. This one is darkly special to me, since Joanna was the mastermind behind it,” said Ashley of the series.

“Aiden truly made the character her own, Tommy was amazing as per usual… and every supporting character really did incredible. The sex, the acting and the entire package of this movie is something I’m really proud of – and I’m excited for BurningAngel fans, as well as all the new Adult Time subscribers, to enjoy this masterpiece.”

Insomniac is now accessible to all members of Gamma Films studios’ sites, as well as the new Adult Time platform, officially launching Spring 2019; those interested in sneaking a peek or purchasing the series can visit to sign up and subscribe to Adult Time’s entire catalog of award-winning content, giving its members access to over 50,000 scenes within the Gamma Films studio network.

Webmasters can get in on the success early by joining the FameDollars affiliate program.

About Joanna Angel and BurningAngel