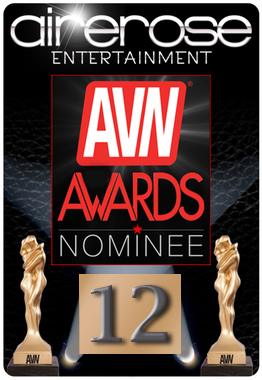 (Van Nuys, CA) December 7, 2016 – Airerose Entertainment has received twelve nominations for its titles at  the upcoming 2017 AVN Awards, including Female Performer of the Year nods for its two Brand Ambassadors, Abella Danger and Jasmine Jae.

Taking place at The Joint in Hard Rock Hotel & Casino in Las Vegas on Saturday, January 21, the AVN Awards celebrates the best of the best in the adult entertainment.

“We’re so honored to receive these nominations!” says Adam H., VP of Airerose Entertainment. “We have worked diligently over the past year to make sure Airerose stands toe to toe with the industry’s best gonzo studios. Having our titles nominated in such a wide array of categories, and our two awesome brand ambassadors getting recognition for their performances in the two highest-level categories in their fields, means we’re making the right strides to bring high-quality gonzo films, featuring the best in the industry, directly to our fans. Thank you, AVN and the nomination committee, for recognizing our work!”

For over three decades, the AVN Awards show, dubbed “the Oscars of adult” by Entertainment Weekly, has been the adult industry’s biggest night, and the award itself the industry’s highest honor. With a stylish red carpet pre-show and lavish star-studded ceremony, AVN celebrates outstanding achievements in “the business of pleasure”; this year’s Awards Show will be hosted by Riley Reid and Aspen Rae. For more information on the 34th Annual AVN Awards Show, visit AVNAwards.com, The AVN Awards on Facebook, or on Twitter @AVNAwards.

Webmasters who want to promote the official Airerose Entertainment Airerose.com paysite can do so by signing up at the Buttbucks affiliate program.

No spam, notifications only about new products, updates.
PrevPreviousBrett Rossi Starts Off Nominations Season with a Bang
NextPure Play Media and Private Media Group Release I Confess Files Part 3Next
On Key