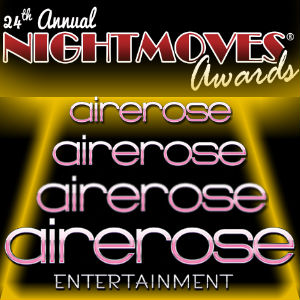 “Receiving these awards means we’re doing things right: selecting the right directors and talent, and putting out the best gonzo content in the industry,” says Adam H., VP of Airerose Entertainment. “Thank you, NightMoves, for recognizing our work!”

The NightMoves® Awards, started in 1993, is the third oldest and continuously running adult awards show in the United States, trailing only the AVN Awards and the XRCO Awards. For more information visit the NightMoves® awards show page; it can also be followed on Twitter @NightMovesShow, or on the NightMovesMagazine Facebook page.

Pure Play Media is the exclusive distributor for Airerose Entertainment. Retailers and distributors interested in ordering Airerose titles should contact Adam H. via e-mail at adam@pureplaymedia.com or at 800-999-2483 x1228.

Webmasters wishing to promote the Airerose catalogue can do so by signing up at ButtBucks.