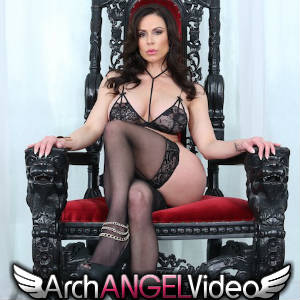 Although Lust has been in the adult industry for five years, she has saved many firsts for ArchAngel. They released her first interracial scene in 2014, and now they’re releasing her 1st DP scene. The unforgettable scene stars the multi-award winning star, along with male heavyweight talent Mick Blue and Markus Dupree. It will be exclusive to the ArchAngel website, until Lust’s showcase The Booty Queen 3 is released on DVD next month.

“Hearing about ArchAngel signing Kendra for a year was one thing, but hearing Kendra was interested in doing her 1st DP almost made me fall out of my chair,” says General Manager and Director MimeFreak. “I’m so excited for the fans to see this scene.”

“I finally did it people, I got DP’d and it’s filthy perfection!” says Lust. “This is one of the strongest scenes I’ve filmed to date and I can’t wait for you to see it. I got to work with Markus Dupree and Mick Blue, two of my favorite performers, and I feel the fans will appreciate the intensity of sexual chemistry between the three of us. Working with MimeFreak on this project was so much fun, and he did an amazing job at capturing the raw nature of the scene. Archangel does it again!”

“We’re honored that Kendra has given us so many firsts and been a huge part of our company’s success,” says Gabriel Guzman. “This scene is something the fans have been requesting for a very long time. It could be our most popular scene in the entire history of our company.”

Webmasters can contribute to history and make money promoting Lust’s first-ever DP, as well as all her incredible scenes and all of ArchangelVideo.com‘s extensive library by joining up with ArchangelDollars.com, their official affiliate program.

No spam, notifications only about new products, updates.
PrevPreviousSarah Vandella Takes on a Broad Range of Roles in New Scenes
NextPure Play Media & Naughty America Release “I Have a Wife 43”Next
On Key