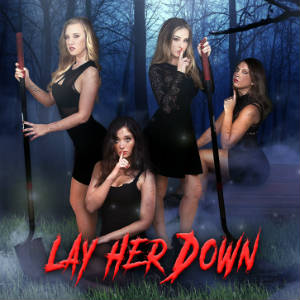 (Hollywood, CA) April 12, 2017 – Girl-next-door Bailey Brooke is one of the stars of Digital Playground’s new murderous thriller Lay Her Down.

Lay Her Down revolves around five friends. One of the girls can’t keep her mouth shut, so her friends take drastic matters and kill her. But, is she really dead? Her friends are disappearing and she’s reappeared. Brooke gets to show her acting chops and has two sex scenes in the movie – a boy/girl with Marco Ducati and a group scene with Aubrey Rose, Mariah, and Johnny Castle. Lay Her Down is out now on DVD. The trailer and individual scenes can be viewed at http://www.digitalplayground.com/movies/trailer/1386317/lay-her-down/.

“I’m really excited that Lay Her Down is out on DVD and hope my fans will pick it up,” says Brooke. “I’m very proud of both my acting and my sex scenes in the movie, and hope when awards season comes around, I will get some nominations and potentially wins.”

Uber Brooke fans are going to love her new contest. She’s doing a raffle and giving away an all-expense paid trip to Las Vegas to star in an adult film with her. The raffle started on Monday and ends on June 10th or as soon as all the raffle tickets are sold (whichever comes first). Tickets are $10 each and there’s no limit on how many can be bought. All the details at https://www.baileybrookeproductions.com/product-page/trip-to-las-vegas-to-star-in-an-adult-film.

Webmasters wanting to promote DigitalPlayground.com should sign up for the monster affiliate program AdultForce.com.

Bailey Brooke is a flawless, all-natural blonde with the innocent teen girl next door look. She’s a former cheerleader and known for her perky T&A, as well as her ability to get down and dirty with some the top male and female performers in adult.

In addition to being an in-demand performer, Bailey also has her own production company, Bailey Brooke Productions – most of her films can be seen on ManyVids https://www.manyvids.com/Profile/540065/TheBaileyBrooke/. Her official website https://www.baileybrookeproductions.com has a store with exclusive and signed items, a photo gallery, and information on Skype shows and how to get her on your set. Keep up with everything in her world by following her on Twitter @baileybrookecam, Snapchat @kayla_boobbear and IG at @baileybrooke_cam.

Brooke is self-booking. Get her on your set without fees. See what she’s available for and get her stats at BaileyBrookeProductions.com. Email Bailey at Bookbaileyxxx@gmail.com for more info.

To interview Bailey Brooke for your site, publication or show, contact Erika Icon of The Rub PR at erika@therubpr.com.