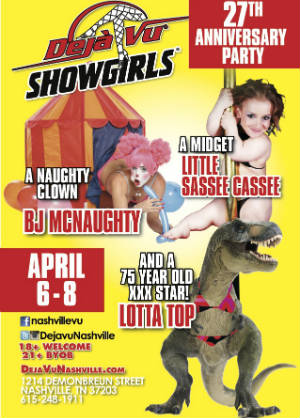 BJ McNaughty is the premiere professional naughty clown who likes balloon animals, cotton candy and the tears of grown men. “Are you down to clown?”

Mature blonde Lotta Topp was a member of the 80s elite “uber boobers”, amazing sluts whose tits reached ungodly proportions and made for some of the hottest and unique fuck stars ever. Topp also had quite the wild side, appearing in fetish-oriented material including domination and smothering.

Little Sassee Cassee is the smallest pole dancer in the world and inventor of the Koala Pole climb, among other claims to fame, as well as being “that” midget stripper who did a lap dance for Honey Boo Boo’s Mama June last year.

The celebrity performers will be mingling, doing lap dances as well as posing for and signing photos after their performances.

Besides being the capital of Tennessee, Nashville is also known as Music City USA and is the current home for the CMAs or the Country Music Awards. Opryland is always a constant draw as is “Honky-Tonking”, better known as Bar-Hopping along the downtown corridors. Vanderbilt University is also located here and is an institution of higher learning known for some of the most beautiful ladies in the south as well as one of the biggest party colleges in the US.

With a club capacity at just over 200, the Nashville Vu’ gives way to over 40+ sexy nude nubiles in a relaxing atmosphere one could almost call home. Since its gala grand opening way back in 1989, the Tennessee locale has packed the house night after night with the steamiest entertainment in the land, with four VIP areas in each corner of the room and unobstructed views of their large main stage.

Then, from 3:00am until 6:00am, the girls put their clothes back on and the location turns into “Flow”, an after-hours BYOB with a strict dress code and couples dancing around the room and on stage.

Now in its 27th year, the Déjà Vu is celebrating “the best of both worlds!”

For more information or to book BJ McNaughty & Lotta Topp, contact Centerfold Features direct at 1-877-427-8747, or head over to www.CenterfoldStrips.com