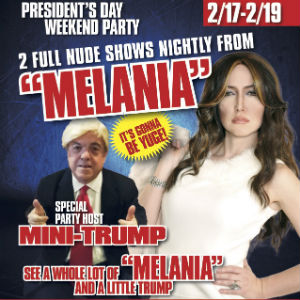 Melania Trump LA will be performing two shows nightly. Between shows she will be mingling with guests, taking photos and doing lap dances.

“I can’t wait to rock the stage at Larry Flynt’s Hustler Club and party with my fans!” says Melania Trump LA. “These shows will definitely be standing room only – so make sure to get there early.”

The Hustler Strip Club is located on the world famous “Baltimore Block” in the historic Gayety theatre building. The Gayety was transformed into Larry Flynt’s Hustler Club in 2003, featuring two floors full of Hustler Honeys, and where the second floor finds a wide variety of themed VIP champagne rooms, including “the lodge”, the “barely legal” room, and the “club within a club” VIP room with it’s own bar and private VIP balcony. In addition, the 2nd floor features a unique see-through glass stage that provides guests on the first floor with an interesting view of the dancing Honeys.

Call 410-468-0990 or click BaltimoreHustlerClub.com for more info or reservations.

For more information or to book Mini Donald Trump to host and Melania Trump LA to headline on stage at your event or gentlemen’s club please contact Centerfold Features direct at 1-877-427-8747.