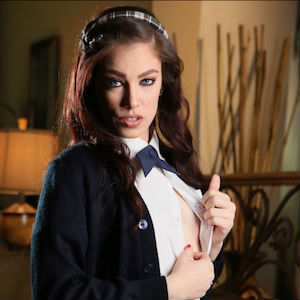 (New York, NY) Kinky girl next door Bobbi Dylan is one of the stars of Digital Sin‘s newest taboo family series, Family Friendly. Bobbi’s first project with them, Schoolgirl Bound 3, released on DVD last June, was a hit with fans and critics.

Family Friendly is vignettes woven together with the theme of steamy taboo encounters. Dylan keeps texting her booty call. Her friend wants to know who it is, but she doesn’t tell her. Then Dylan asks her friend what she thinks about having sex with her step brother. After the reaction Dylan gets, she knows she needs to keep it on the down low that she’s fucking her step brother Xander Corvus.

“I love working with Digital Sin – Paul Woodcrest was amazing, and so was the script and cast,” says Dylan. “The scene with Xander and me is very hot and not to be missed. I’m sure next year it will get a lot of nominations.”

Watch the trailer at http://www.adultdvdempire.com/1877584/family-friendly-porn-movies.html.

Dylan is now self-booking. To get her on your set, email her at BobbiDylanXXX@gmail.com.

To interview Bobbi Dylan for your site, publication or show, contact Erika Icon of The Rub PR at erika@therubpr.com.