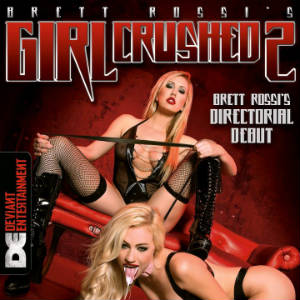 Rossi also stars in Girl Crushed 2 in an unforgettable scene with Lyra Law that involves milk, pet play, and domination.

The previous entry in the high-end domination series was directed by A. Slayer.

“My goal was always to direct and working with Deviant has been amazing,” says Rossi. “I’m so appreciative that Deviant gave me the chance. A. Slayer was behind me 100% and let me handpick the cast and gave me a lot of artistic freedom to direct a series that was previously part of his franchise. I’m looking forward to my next movie I will be directing and am happy to be part of the Deviant family.”

Girl Crushed 2 is available now at local adult stores and online e-tailers. Scenes from the DVD will also be available on Brett’s official site as well as DeviantHardcore.com, powered by affiliate program MetroMoney.com.

To promote Rossi’s own www.BrettRossi.com, (recently relaunched through the CrushGirls Network),  webmasters should join the CrushGirls program, powered by ModelCentro.

Deviant Entertainment is distributed through Metro. For foreign and domestic DVD sales, licensing, and broadcast contact Ryan Thomas at ryanthomas@metroemail.com or 888-464-4856.

No spam, notifications only about new products, updates.
PrevPreviousRyan Driller Loses His Virginity in New Scene from Pretty Dirty
NextBailey Brooke’s Mouth Of Bounty For The Month Of May: A Round UpNext
On Key