Brooklyn Chase Finds Out What a Stepson’s Duty Really Is

Brooklyn Chase Finds Out What a Stepson’s Duty Really Is 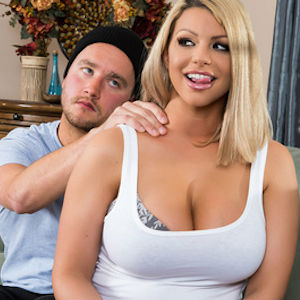 In A Stepson’s Duty, Chase plays Van Wylde’s stepmom. Her husband is away for the weekend and Chase sees it as the perfect opportunity to get to know Wylde better. He wants to ditch movie night, but she insists that he give her a massage – and what starts out as innocent has her taking off her bra and becomes an oiled-up fuckfest. But Chase gets the biggest surprise when Wylde decides to knock on her back door, and it all ends with a massive load on Chase’s tits and Wylde advising her ‘Don’t Tell Dad’.

Watch the trailer at https://www.newbrazzers.com/video/A%20Stepsons%20Duty/i40607/ and the full scene at http://www.brazzers.com/scenes/view/id/10347/a-stepsons-duty/.

Another place you will find Chase is on her official site on the PUBA network, BrooklynChase.com. She has several brand-new scenes and photos that you won’t see anywhere else, including her taking some massive BBC from Jon Jon, hot lesbian action with Darcie Dolce, and getting busy with Brad Knight on an aqua couch. Take a peak and take her own personal tour of the site.