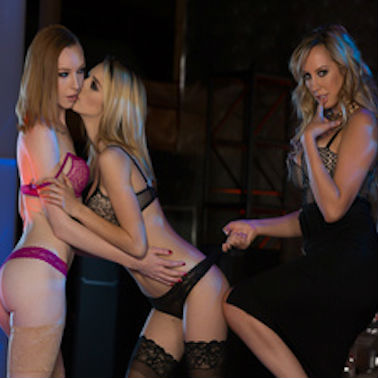 (Hollywood, CA) Curvy blonde girl next door Brett Rossi stars in the latest all-girl scene from Twistys and shows them how it’s done.

In Show Them How It’s Done on Twistys network’s When Girls Play, Rossi plays a producer of a lingerie fashion show. Blake Eden and Katy Kiss are doing a rehearsal on the catwalk, but still can’t seem to get it right. Producer Rossi asks for the houselights to come up, and what starts as a critique of the girls’ performance turns into an explosive three-way right on the stage. And it doesn’t get hotter than this.

“I started my career with Twistys, and it’s always a pleasure to work with them – this is my first scene back with them since I was a contract girl,” says Rossi. “My co-stars Blake and Katy were amazing and our chemistry was out of this world. If you’re not already a member of Twistys, you definitely need to join now and see this scene.”

Until rossi’s own site is relaunchede in early 2017, Webmasters can promote all-Rossi content and/or hundreds of other amazing modelsnon the Twistys roster by signing up with the AdultForce affiliate program.