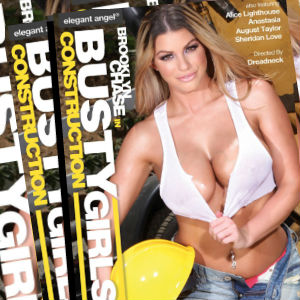 Posing in a bright red bra and panty set in front of a wooden Asian screen and looking super sultry, Chase is the cover girl for the December issue of Xtreme Magazine. This is her very first cover and interview with the local adult entertainment guide. Chase also has a four-page spread inside that features a two-page centerfold and other new photos of her, along with an interview covering topics like how she got her start in adult, the difference between shooting a scene with Lexington Steele and Mandingo, and much more.

Xtreme is available at gentlemen’s clubs in the Mid-Atlantic States including NY, NJ, DC, and PA and available digitally online at http://xtrememagazine.com/digitalmags/xtreme1216/index.html.

“I’m honored to be on the cover of Xtreme and Busty Construction Girls 2,” says Brooklyn Chase. “I hope my fans will pick up both the magazine and DVD. If you bring either to AEE, I will personally autograph them. And, I’ll also be selling copies of both at the show.”

On the cover of Elegant Angel’s new DVD, Busty Construction Girls 2, Chase is wearing short shorts, a barely-there top that displays her amazing breasts, and a hardhat. Her scene starts off with her using a large drill and her boobs bouncing up and down. After she’s done, she douses herself in water, willing to do anything to save her job, including getting busy with her boss.

Webmasters interested in promoting AdultDVDEmpire should sign up with AdultEmpireCash, and can also cash in on Chase’s expanding popularity by promoting her own BrooklynChase.com via PUBACash.