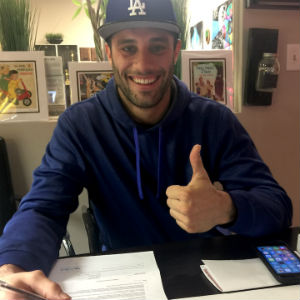 (Los Angeles, CA) Damon Dice is entering his third year in adult. Over the last two years, he’s filmed over 300 scenes for top-shelf studios including Wicked Pictures, Hard X, New Sensations, Naughty America, Hustler, Penthouse, Evil Angel, and Digital Playground. From the beginning of his career he’s been with OC Modeling, and he’s just renewed his contract with them for another year.

The past year has been a stellar one for Dice. He’s had some cherry roles in feature films that have allowed him to display his on-screen presence and diversity as a performer, including Wicked Pictures’ Indiscretions and From the First Moment, with award-winning director Stormy Daniels, and Kay Brandt’s Forked for Adam & Eve. In 2016, he was most-shot guy for both Wicked and Penthouse. Damon also scored three 2017 AVN Award nominations for Best Supporting Actor, Best Boy/Girl Sex Scene, Best Group Sex Scene, along with five XBIZ Award noms for Male Performer of the Year, Best Supporting Actor, and multiple Best Sex Scene nods.

“It was a no brainer to re-sign with OC – they have been with me since the beginning and continue to support my growth as a performer in the industry,” says Dice.  “Not only do I look at them as business partners, I look as them as family, and family always sticks together!”

“We love Damon and we’re so pleased that he re-signed with us,” says Sandra McCarthy, Co-Owner of OC Modeling. “He’s one of the top male talents working in the business and we know he’s going to do even more great things.”

Damon Dice is available exclusively through OC Modeling. Get him on your set by contacting Sandra at 818.298.6939 or Sandra@ocmodeling.com.

All media inquiries about OC Modeling and their talent should be directed to Erika Icon of The Rub PR at erika@therubpr.com.