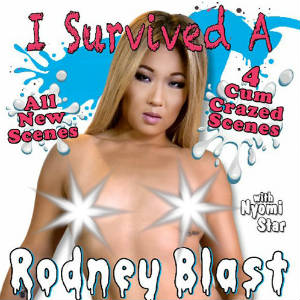 In his latest release, I Survived a Rodney Blast 20, the “King of Cream” Moore shows his fresh-faced costars “the ropes,” in more ways than one, when it comes to making pornographic magic.

Petite cutie Anastasia Rose comes to Rodney’s gym for her very first workout. He shows her how to exercise her lips and tongue by licking his ass and sucking his cock. She can literally feel the muscles in her mouth strengthening, as Rodney playfully smacks her cheeks. He concludes their session by pouring a very special protein shake all over Anastasia’s face and feeding her every last drop.

Blonde Asian beauty Nyomi Star gives Rodney some sloppy head and eat ass for the first time, but she expects that he eat her juicy box and suck her toes in return. With a little tough love, Rodney takes a liking to the licking before jizzing all over her talented tongue.

I Survived a Rodney Blast 20 is out now and available at your local adult store or favorite online adult retailer, including Adult Empire.

For a preview, webmasters can go to http://store.rodneymoore.com/1935509/i-survived-a-rodney-blast-19-porn-movies.html, and follow-up by joining the AdultEmpireCash affiliate program for full promotional support.