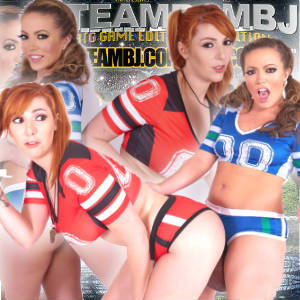 (Las Vegas, NV) March 13, 2017 – Lauren Phillips & Carmen Valentina are going ahead with their promise to give BJs to almost 500,000 Twitter followers if the Patriots won the Superbowl. The YouTube video of the pledge by the girls (found on the Official TeamBJ YouTube channel or at TeamBJ.com) picked up a whopping 460,000 views.

The event is known as #TeamBJ.

Every follower wanting a BJ from Phillips & Valentina has been invited to Las Vegas tomorrow, Tuesday, March 14, to collect a 100% free BJ. The event will be streamed live at their official sites LaurenPhillips.com and CarmenValentina.com and through the VNALive.com network – free to members. More events in other parts of the USA are also being considered, depending on the Las Vegas turnout.

This is the fifth installment of #TeamBJ, which burst to fame in 2010 when Bobbi Eden, Vicky Vette and Gabby Quinteros promised BJs if Holland won the World Cup. Overnight, #TeamBJ became the talk of the Huffington Post, Yahoo Sports, ESPN and just about every sports station in the USA and around the world.

Three years ago, in 2014, #TeamBJ returned with Sara Jay and Siri pledging BJs to their followers if Germany won the World Cup. Germany took home the trophy, the girls delivered, and, as with every win, released a DVD of the event, which was also streamed live.

Both Phillips and Valentina are part of the VNAGirls.com network, which has hosted all of the #TeamBJ events.

“I really hope as many followers who can make it this Tuesday to Las Vegas will take advantage of a once in a lifetime opportunity,” said Phillips. “We are really looking forward to Tuesday and can’t wait to find out how many followers show up for some fun. I hope it’s a lot! I am very excited!”

“I have my knee pads, some baby wipes and am ready to stay on my knees as long as there are followers who want a BJ,” said Valentina. “Get to Vegas and have the story of a lifetime with me and Lauren,”

Phillips and Valentina will also be featuring together on Tuesday night, March 14 at Deja Vu Showgirls 3247 Sammy Davis Jr Dr, Las Vegas, NV 89109. They will then feature together on March 24 and 25 at Showgirl III, at 930 Coliseum Blvd E, Fort Wayne, IN 46805.

Webmasters can promote both Phillips’ and Valentina’s sites, as well as all the VNA Girls by joining the Sticky Dollars Affiliate Program.

No spam, notifications only about new products, updates.
PrevPreviousRicky Johnson Gets Out of the Friend Zone in New DarkX Scene
NextYNOT Grand Prix Phoenix: Hot Fun in the DesertNext
On Key