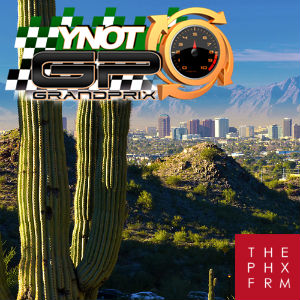 (Phoenix, AZ) March 13, 2017 – The weather won’t be the only heat in Phoenix March 22 when the YNOT Grand Prix, an official opening event for The Phoenix Forum, takes to the track at Octane Raceway.

Always one of the hottest games in town, the YNOT Grand Prix’s Phoenix leg is the only U.S. race on the circuit this year. American drivers, now’s your chance to increase your point standing if you’re vying for the $1,000 cash prize awarded to the driver with the highest rank at the end of the season.

Octane Raceway’s one-third-mile track is the only full-time indoor-outdoor track in the U.S. One of the most popular on the circuit, the track’s unique design starts each lap indoors before winding through outdoor switchbacks and straightaways and returning inside. Drivers face new challenges at every turn in electric karts with ultra-fast acceleration.

As always, the Mexican buffet and drinks are on the house, thanks to sponsors JuicyAds, BongaCash, Studio 20,Traffic Mansion and International Processing Solution. In addition to the food, YNOT Group LLC co-owner and Grand Prix producer Jay Kopita has arranged for original music, composed, recorded and mixed by David Hiri Feign, creator of Cockology and co-owner of Bateworld.com.

But wait! There’s more: To celebrate attending their first YNOT Grand Prix, Online IPS execs are bringing along prizes not available at any other race.

“The YNOT Grand Prix is one of the most fun traditions that helps keep our industry connected,” said Online IPS President Dennis D. “For a long time we’ve wanted to work with Jay on it, and we’re thrilled to finally get a chance to play an important role. We have some really exciting, unusual prizes for some of the drivers, and we’re excited to get to know some new colleagues at the same time.”

Based on the way the Phoenix race has grown each year, Kopita expects a record-setting crowd. Not bad for a “little event” that started as a one-off in 2010.

“Even after all these years, the YNOT Grand Prix continues to be exciting, fun and a little different each time,” he said. “It has become a mainstay at some of the best industry trade shows, and I couldn’t be happier with the support we get year after year.”

The starting flag will drop on the first heat promptly at 6 p.m. Busses provided by CCBill will make round trips between the Phoenix Forum’s headquarters at the Tempe Mission Palms Hotel and Octane Raceway from 5:30 p.m. to 9 p.m.

Two additional races remain on the YNOT Grand Prix’s 2017 circuit: AWSummit in Mamaia, Romania, in June, and The European Summit‘s September show in Prague. To secure a seat as a driver or to enquire regarding sponsorship opportunities at either or both, email Kopita or Skype him at LAJConsulting.

For more information about the YNOT Grand Prix, visit YNOTGP.com.