Tragedy unfolds in front of your eyes, as you are immersed in a VR experience 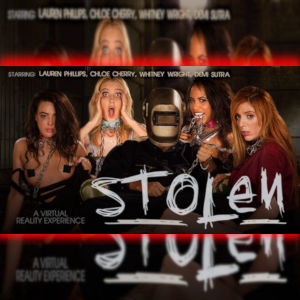 In their newest 2018 Halloween Special, Stolen, the producers have created a full and complementary experience in the spooky, Halloween theme, adding it to their website as a “treat” for both newcomers and veteran members within the regular price of their subscription. The whole production was shot with use of the famous Head Rig that Virtual Reality Bangers are known for, which allowed the maximum immersion for the actor being filmed and his sexy co-stars, causing utmost genuine reactions from the interactions with the camera.

The newest VR Bangers’ experience is a psychological mystery in which the users of the website will be allowed to vote for the character played by their favorite pornstar – and in effect letting her stay alive in this manic game. The fates of Lauren Phillips, Chloe Cherry, Whitney Wright and Demi Sutra will be in the hands of the members of the Virtual Reality Bangers’ family – and not only that, as they will have to simultaneously vote on which of the girls is a villain in this intellectual clash. The whole script is a modern day interpretation of a timeless English thriller classic that inspired worldwide enigmatic dinner initiatives, written by a well-known Hollywood script writer, who remains anonymous due to the adult nature of the production.

“No one has ever done that before, and that is exactly why we had to do that first,” adds Daniel Abramovich, the CEO of VR Bangers. “VR companies do not shoot the full-length films – and if they do, it is a torture to watch, so we have decided to change that once and for all.

To sweeten the deal even further, Virtual Reality Bangers have also prepared a special promo going on around the date of Halloween, to encourage new fans to join their ever-growing family and make it easier for the existing ones to extend their membership for less money. More details on the promotion will be revealed on the producers’ website by the end of October – rumors say, though, that the VRB’s prices are going to be “diabolic” this year, going as low as $6.66 in some cases!

“We have always wanted to create something as immersive and interactive like this, and Halloween seemed to be a great occasion for that,” explains Alex Nash, the Producer of VR Bangers. “The entire special story will be available worldwide and its’ grand finale will happen right on the Halloween day. Until that date, we encourage every user of the VR Bangers’ network to vote for his favorite and most suspicious of our sexy performers – the flow of the story can be changed by our members entirely, so we want them all to enjoy this newest feature of ours for whole two weeks of the event’s period.”

Webmasters can profit from the VR fear feature by joining their affiliate program, VBRCash.com.