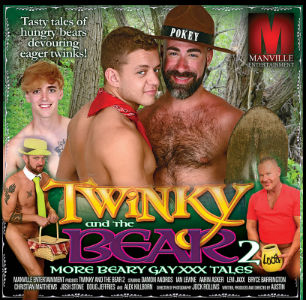 “I love unexpected themes and pairings,” says Austin. “With the first Twinky and the Bear, the juxtaposition between hairy and smooth really struck a chord with fans.”

FriskyFans.org agreed, writing, “Twinky and the Bear is an enjoyable diversion from Manville Entertainment. The movie showcases what the manly men of a certain age are teaching today’s millennial generation when they barge into their homes.”

Retailers and distributors interested in ordering Manville Entertainment titles should contact Adam H. via e-mail at adam@pureplaymedia.com or at 800-999-2483 x1228.

Webmasters interested in promoting the movie online should do so through GayHotMovies.com, where Manville pre-released Twinky and the Bear 2 on VOD last January, by joining up with the MovieDollars affiliate program.