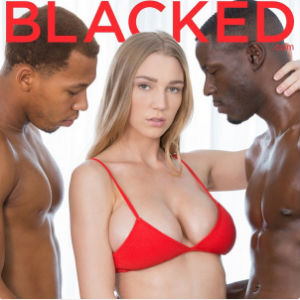 (Los Angeles, CA) February 13, 2017 – Ricky Johnson has become an object of Kendra Sunderland’s Obsession in Part 4 of the Blacked.com series.

Exclusive Blacked model Sunderland and her boyfriend have decided to take their relationship to the next level – she can fuck other people if he can watch, which is usually out of sight, like a true voyeur. One day after a photo shoot with Johnson and Jason Brown, Kendra decides she wants to have Johnson and Brown.  Her boyfriend isn’t around, but Sunderland lets him listen in on her cell phone. Sunderland and the guys head to the bedroom and the real fun ensues in an unforgettable three-way.

Kendra’s Obsession Part 4 is the Blacked featured scene of the week and has scored a 9.2 out of 10 stars in ratings. The scene runs almost 40 minutes and is the culmination of the uber-popular series. Only members of Blacked.com can watch the exclusive scene, but non-members can watch the trailer. See both at https://www.blacked.com/kendras-obsession-part-4?autoplay=true.

“I always enjoy working with Blacked and have wanted to work with Kendra for some time now,” says Johnson. “The scene was a lot of fun to shoot and it came out really well. If you’re a fan of Kendra, Jason and/or me, you’re in for a real treat. Please make sure to rate the scene with lots of stars, so you will see more of me on the site.”

Webmasters interested in becoming affiliates of Blacked.com must be invited/accepted into it’s exclusive and private program. Click Here to give it a shot, but don’t hold your breath!