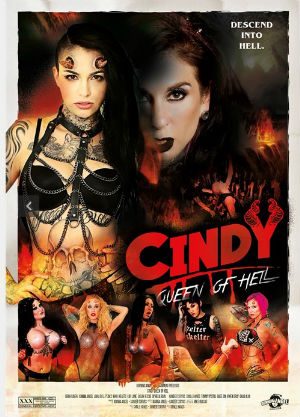 Sarah Jessie and most of the stars of Cindy Queen of Hell sport devil horns, because more than half the movie literally takes place in Hell. The plot of the movie revolves around Raven (Joanna Angel) getting knocked up by the Devil (Xander Corvus). 21 years later Raven has to tell her daughter Cindy (Leigh Raven) who her father is so, she can make the choice to remain on Earth or become the next ruler of Hell.

To make her decision, Cindy must descend into Hell. While in the underworld, she sees a lot of demon sex, including Small Hands and Sarah going at it. Wearing a black fishnet booty suit and knee high black boots, Sarah seduces Small Hands. They go at it surrounded by the fires of Hell and skulls on a staircase that never seems to end. It’s one of the most memorable sex scenes in the film, and the only one that’s not a three-way.

“I loved working with Burning Angel and of course, Joanna and Small Hands,” says Jessie. “Their sets are always fun. This is the third scene I’ve done for them and hope to work with them a lot more in the future. If you’re a fan of mine and/or hot tatted girls and guys, definitely pick up the DVD!”

Webmasters interested in promoting Cindy Queen of Hell and many other AdultDVDEmpire titles can join AdultEmpireCash.com or focus on Official Sarah Jessie via the PUBACash affiliate program.

Sarah Jessie is available exclusively through OCM. Get her on your set by contacting Sandra at 818.298.6939 or Sandra@ocmodeling.com.

To interview Sarah Jessie for your site, show, or publication, contact Erika Icon of The Rub PR at erika@therubpr.com.

Sarah Jessie has scored countless DVD covers and is infamous for her body art, which has led her to be cast in many adult tattoo-themed titles, along with mainstream movies and music videos. She’s graced the pages of Penthouse, Hustler, Fox and Fuse magazines. Throughout her illustrious career, the AVN Awards have nominated her for Best Body, Best Boobs Best Interracial Scene, and Best Group Sex Scene. In 2015, she took home the statue for the Inked Awards’ Feature of the Year.

Prior to entering adult, she lived in Melbourne, Australia and danced at Bar 20 and Showgirls gentlemen’s clubs, while attending university. She’s always loved sex and was having threesomes, group sex and getting DPed, before she ever thought of entering the sex industry. When she’s not on set, you’ll find her shopping or getting her next tattoo. The Detroit native loves rock music and is very serious about her body – she’s a vegan, who loves to workout.

Keep up with everything going on in her world by following her on’ Twitter at @sarahjessiexxx and Instagram https://instagram.com/sarahjessie420/. Call, text and share exclusive photos with her on Dreamlover.

Sarah Jessie is available exclusively through OCM. Get her on your set by contacting Sandra at 818.298.6939 or Sandra@ocmodeling.com.

To interview Sarah Jessie for your site, show, or publication, contact Erika Icon of The Rub PR at erika@therubpr.com.