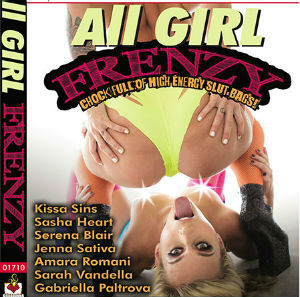 In Team Skeet’s Feed Me Your Holes on their Dyked site, Vandella plays the mom. Her son has been jilted by Lily Adams. Vandella has a zero tolerance policy for little sluts who toy with her son’s heart and informs Adams that “A slut like you needs a lesson, and I’m going to be the bitch who gives it to you.” Vandella pushes Adams against a wall, rips off her clothes, and eats her every hole. All this leads to a very hot lesbian scene that you don’t want to miss a second of. The trailer and the whole scene can be seen at TeamSkeet.

Another place you will find Vandella this week is on Evil Angel’s All Girl Frenzy DVD. Vandella is paired with the exotic Gabriella Paltrova, and the two can’t keep their hands or mouths off each other. Fingers, tongues, and toys aren’t enough, and they even fill their asses with gummy candies and shoot them out into one another’s mouths. Directed by Aiden Riley, All Girl Frenzy is out now, and also stars Amara Romani, Jenna Sativa, Kissa Sins, Sasha Heart, and Serena Blair. The DVD is over three hours and has exclusive behind the scenes footage. Get a sneak of the some of the wildest girl on girl action you’ve seen in a long time at EvilAngel Video.

“I love doing intense girl/girl scenes, and both of these scenes are really hot,” says Vandella. “If you’re not a member of Team Skeet, you definitely need to join to see my scene. Also, make sure to go to my Team Skeet bio page to request me for future scenes and suggest a scenario. The Evil Angel DVD is a definite must-have if you’re a fan and/or lover of all-girl films.”

Webmasters interested in promoting can push TeamSkeet with the PaperStreetCash affiliate program, EvilAngel is supported by FameDollars and Vandella’s own SarahVandella.com can be promoted via PremiumCash.com.