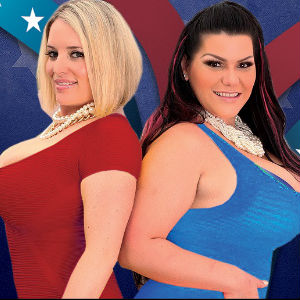 A YouTube video of that pledge picked up substantial mainstream press and a whopping 300,000+ views in under a week (and can be seen here https://youtu.be/dTNcTo4ut2s.)

Despite Trump winning, in an effort to bring the country back together, the girls have decided to give two lucky fans BJs – one to a Trump voter and one to an “anyone but Trump” voter. The “consolation” YouTube pledge with funny bloopers can be seen here: https://youtu.be/TpnenrMc6K8.

Cuban American Castro is a frequent guest on mainstream Spanish media outlets. Among other things Castro was the first adult star ever make a morning appearance on Telemundo. She also co-hosts a popular talk show “SOS” (Sex or Sexy) on Miratv.tv.

Known for her large 32G all-natural chest and based in South Florida, Green got her start in adult with PinUpFiles.com & Score. She has shot hardcore content for Scoreland, Reality Kings, and Naughty America, among others.

“I was really shocked when Trump won the election,” says Castro. “Maggie & I absolutely planned on giving all our followers BJs if he lost. The country is completely divided. What better way to bring everyone together than with a BJ to both sides? I think we can bring even the most ardent Trump and Clinton supporters together with a BJ! I guarantee they won’t leave angry.”

“I was on the edge of my seat election night and was super bummed when Trump won,” says Green. “Our followers were incredibly disappointed. We still want to put a smile on the voters’ faces. There’s so much division in the country it would be nice to see people who don’t see eye to eye… get off together.”

To qualify for a BJ fans must follow both Angelina Castro & Maggie Green on Twitter, have voted and tweet the girls why they should be selected for a BJ. Details on the followers chosen will be posted on TeamBJ.com.

“I am a citizen but Trump still might deport me when he gets in office for being too Cuban,” says Castro. “Hopefully he doesn’t revoke my papers by executive order!”

Both both busty babes are part of the VNAGirls.com network, and webmasters can promote either of their sites, among the many others on that network, by signing up for the Sticky Dollars affiliate program.

#TeamBJ burst to fame in 2010 when Bobbi Eden, with help from Vicky Vette and Gabby Quinteros, promised BJs if Holland won the World Cup. Overnight, #TeamBJ became the talk of the Huffington Post, Yahoo Sports, ESPN and just about every sports station in the USA and around the world. Holland lost in extra time that year. Undeterred, in 2012 adult stars Sara Jay and Angelina Castro took up the #TeamBJ torch promising all their followers BJs if the Miami Heat won the NBA Title. Several high profile media appearances resulted such as the Russell Brand show on the FX Network and the NBA threatened legal action. The Heat won the title. Sara Jay & Angelina delivered on their promise (releasing a DVD and streaming the event live as proof). Two years ago, in 2014 #TeamBJ returned for a third tour of duty as Sara Jay and Siri stepped up to promise BJs to all their followers if Germany won the World Cup. Germany took home the trophy, and the girls delivered on their promise (also releasing a DVD and streaming the event live).