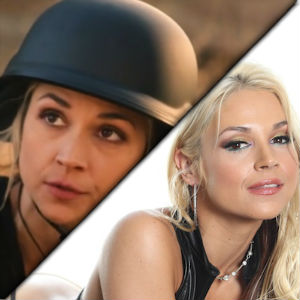 (Hollywood, CA) Blonde bombshell Sarah Vandella is playing a DEA Special Agent in Girlsway’s original mini-series Extradition. Directed by Stills By Alan and produced by Bree Mills, the three-part series lets Vandella show her acting chops in a different kind of role that her fans will love.

In Part 1 of Extradition, Agent Vandella and her cohorts capture Mexican hostage Kat Dior inside a cartel facility. She questions Dior, who’s naked and restrained, about intel on the kidnapped daughter of a US Senator believed to be held in the cartel’s facility. In between the questioning the scene flashes back to a very hot three-way with cartel boss La Luna Star and prostitutes Dior and Adriana Sephora.

“I love working with Stills By Alan, and was really impressed with his script for this mini-series,” says Vandella. “It’s great to not only do sex scenes, but also to be able to show my acting abilities. Make sure to watch the entire series, even though I’m just in Part 1 and Part 3. It’s a very intricate story line, and you don’t want to miss any of it.”

Part 1 of Extradition is out today exclusively on Girlsway. View the trailer and the scene at http://www.girlsway.com/en/video//Extradition-Part-One-Scene-01/120965. Part 2 will be out tomorrow, but Part 3 with Vandella’s sex scene won’t be out until January 26th.

Webmasters have two avenues to promote here. With Girlsway, they can be affiliates for FameDollars.com, or if they want to promote Vandella alone, her SarahVandella.com can be promoted through PremiumCash.com.

But remember for the nonce Extradition is exclusive to Girlsway!