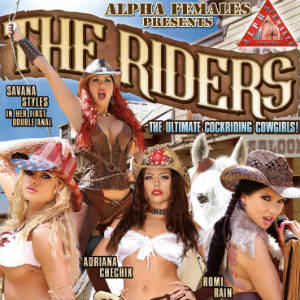 Watch the trailer on Die Screaming http://www.die-screaming.com/riders-savana-styles-trailer-850707/. Look for an upcoming in-depth feature on Savana and her film by Holly Kingstown featuring exclusive photos on Fleshbot.com later this week.

Exile Distribution exclusively distributes the Lexington Steele Media Group. Retailers and distributors interested in ordering titles or acquiring their use for broadcast should contact Howard Levine at howard@exiledist.com or call (818) 576-9464.

“I’m so excited that The Riders is finally being released – it’s my directorial debut and I’ve had my hand in the entire process from casting to scripting and everything in between,” says Styles. “I can’t wait for my fans to see the film and hope they enjoy it.”

Today, Styles is moderating #SexTalkTuesday. Her topic will be swinging. Both educational and entertaining, #SexTalkTuesday takes place on Twitter with topics hosted by Sssh.com. The hour-long event starts at 12pm PST/3pm EST. Follow it on Styles’ Twitter timeline by looking for the #SexTalkTuesday hashtag. Everyone is welcome to take part and dialogue about swinging. Make sure you’re following Styles on Twitter at @savanastyles, so you don’t miss a moment of the action.

Affiliates interested in profiting from Styles’ rising star should join the PornstarPlatinum webmaster program to promote the fiery redhead’s SavanaStyles.XXX.