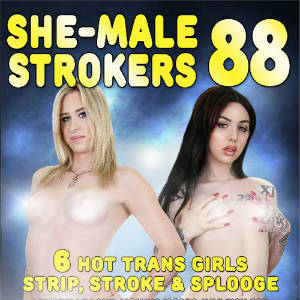 Since 2002, Mancini has been a pioneer in the transgender erotica industry, and he is known for his ability to capture authentically sexy moments with brand new faces and long time favorites alike. He loves shooting solos in particular because, as he says, “They put more focus on the individual, and it makes it easier for the person watching to fantasize that the viewer is right there with the performer.”

Mancini avoids over the top theatrics, in favor of genuine performances from his models, as if they were having intimate sex with their boyfriends or lovers.

As fans of the Shemale Strokers series have come to expect, Mancini assembles some of the newest and hottest transgender models in the industry to “Strip, Stroke, and Splooge” for their very first time on the famous Strokers’ couch. Each of these young and unique women is sexy, feminine, open minded, and she knows just the right way to please a man in the bedroom. They might look like your typical “Girls Next Door,” but these transgender sexpots tell you everything you want to know about their transitions, kinks, and sex lives.

Fun-loving Canadian hottie Nikki Vicious likes snowboarding, fast cars, and paintball, but in the bedroom she likes a strong man who can take charge. If you really want to turn her on, try biting her neck. Fellow cover model and real life friend, tattooed beauty Annabelle Lane, is a complete knock out. You’ll be begging to worship at this brunette Goddess’ feet and pay tribute to her all natural trans girl body.

Wearing a tight black leotard and thigh high stockings, sexy blonde Latina Melina George likes big hairy guys, especially if they are uncut like she is. She’s got all kinds of positions she’d like to share with you, and just talking has her dripping with excitement. All-American trans girl Kayleigh Coxx, with blonde hair, blue eyes, and big smile, might seem sweet and innocent at first, but you won’t believe all the dirty secrets this freckled belle has to tell you.

Shemale Strokers 88 is out now and available at your local adult store or favorite online adult retailer, including Adult Empire http://store.shemalestrokers.com/streaming-video-on-demand.

Webmasters can optimize their trans-craving traffic by signing up with AdultEmpireCash.com (Movies) or joining the ShemaleStrokerBucks (websites) affiliate programs.

After receiving an old VHS camera as part of a payment for writing a jingle for a video store in 1991, musician Rodney Moore tried his hand at shooting pornography, with no intention of making a career out of it.

In 2002, under the name Sammy Mancini, Moore began shooting transsexual adult movies and opened one of the first (if not the first) websites to offer trans video content. Ten years later, Sammy Mancini was given the Lifetime Achievement Award at the 2012 Transgender Erotica Awards (TEAs).

According to Mancini, “We are dedicated to being one of the best (if not the best) Trans Women adult sites in the world with 100% original content and frequent updates.”

All media request for Sammy Mancini and Mancini Productions should be directed to Eddie Wood at eddie@shemalestrokers.com.