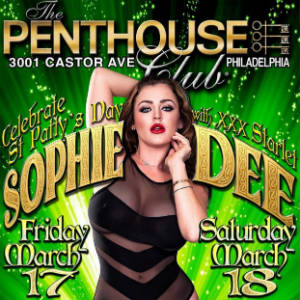 Dee will be available for pictures, autographs and will have videos on hand to sign. She will also bring her signature toy made by Doc Johnson (mypocketpussy.com/sophiedee).

With over 1.7 million Dee followers on Instagram, she is currently ranked #5 in the world on XVideos.com and is #1 in popularity for both the United Kingdom and Europe. She won Miss Freeones in 2011 by fan vote. Dee’s site was nominated for Best Pornstar Website (AVN) and Performer Site of the Year (XBIZ) in 2014. Mainstream roles include the upcoming Penn & Teller movie Director’s Cut, and she has starred in a number of horror movies including Theater of Derange, The Hungover Games, Streets of Vengence and Unmimely Demise. Dee is also featured in a Dillon Francis music video with over 13.8 million views. Her mainstream projects can be found on her IMDB page here: http://www.imdb.com/name/nm1942808/.

“It’s been freeeeezing cold on the east coast this week so I am going to bring something hot for the fans,” says Dee. “St Patrick’s Day Weekend is always a bit crazy so I hope all my fans make it out to Penthouse… I promise to bring a pot of gold.

“If you can’t make it to the club, you can also meet me online at my next members show at my official site SophieDeeLive.com.”

Sophie heads next weekend to Connecticut, March 24 and 25 to Mystique to dance at Bridgeport and Stamford.

Webmasters can find the pot of gold promoting SophieDeeLive.com by signing up with Vicky Vette’s StickyDollars affiliate Program.