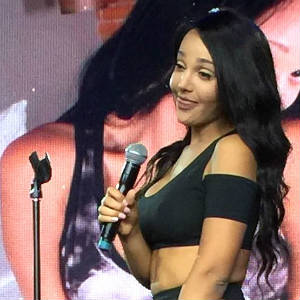 Sunshyne was a hit on the red carpet with paparazzi and attended the awards, sitting in the first row. Wearing a sexy cut out black dress and killer heels, she took the stage to accept her award for Best Transgender Performer. The very humble performer had a long list of people to thank and enchanted the audience.

“I was so overcome and happy at the same time,” says Sunshyne Monroe. “I’d like to thank everyone at Urban X again, as well as Isa at SMC and my publicist Erika Icon. This is just the beginning of many great things to come, so stay tuned.”

The paparazzi also caught Sunshyne as she shopped on Ventura Blvd. after her Vivid Radio appearance. Photos snapped of her surfaced on Hollywood.com and WENN.com. Looking like a California girl in her blue jean shorts, pink sweatshirt and white tennis shoes, her photos were viewed around the world on both sites.

Webmasters can profit from the new award-winner’s homesite SunshyneLand.com and other trans destination by signing up with the SMC Revenue affiliate program.