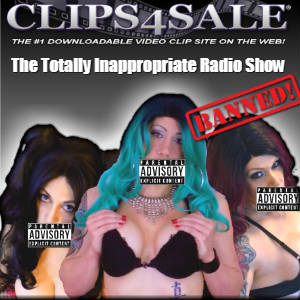 (Hollywood, CA) August 25, 2017 – The Totally Inappropriate Radio Show is having their first executive guest on the show. Known for having a wide array of guests, such as last week’s legend in adult and pioneer in the trans community Kourtney Van Wales, Totally Inappropriate will be welcoming Clips4Sale Owner Neil this Saturday, August 26th.

In a rare live interview, Neil will be discussing the past, present and future of Clips4Sale, their upcoming trade show appearances at Exxxotica New Jersey and the Adult Entertainment Expo (AEE) in Las Vegas, and potentially reveal some upcoming new products and technology coming to the original and still the #1 downloadable video clips site Clips4Sale.com.

“I first met Neil at Fetish Con 2016 and he’s still one of my favorite people in the business,” says show co-host Kimber Haven. “Unlike other company owners, he’s always approachable and down to earth. Since he’s doing the show, of course we’re going to ask him some crazy questions like we always do, so be ready.”

The Totally Inappropriate Radio Show has become one of the top shows on the Demon Seed Network. Helmed by Haven, the show is also hosted by Lexis Steel and Raven Roxx, Saturdays starting at 3pm PST/6pm EST on Demon Seed Radio Network at http://www.demonseedradionetwork.com/. During the two-hour show, listeners can call in and talk with the hosts and/or guests at 708.793.7769.

Catch up on all the shows at http://www.tiradioshow.badgirlmafia.com/ and watch video footage on their Totally Inappropriate Radio Show Youtube Channel.

Webmasters can promote the award-winning performer’s Kimber’s Playroom by simply signing up with her ModelCentro affiliate program.