TeamBJ Returns For the Presidental Elections! Angelina Castro & Maggie Green To Give BJ To ANY Followers Voting Against Trump!

TeamBJ Returns For the Presidental Elections! Angelina Castro & Maggie Green To Give BJ To ANY Followers Voting Against Trump! 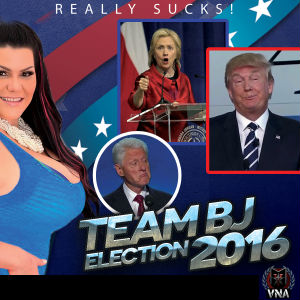 One of Twitter’s first ever adult hashtag phenomenons, #TeamBJ, is bursting back into the spotlight with the upcoming Presidential Elections.  Adult stars Angelina Castro (@AngelinaCastroX) & Maggie Green (@MaggieGreenLive) are promising all of their twitter followers BJs if they vote against Presidential hopeful Donald Trump. Trump MUST lose the election to Clinton to collect.

A YouTube video of the pledge by the girls can be found here https://youtu.be/dTNcTo4ut2s.

#TeamBJ burst to fame in 2010 when Bobbi Eden with help from Vicky Vette and Gabby Quinteros promised BJs if Holland won the World Cup. Overnight, #TeamBJ became the talk of the Huffington Post, Yahoo Sports, ESPN and just about every sports station in the USA and around the world.

Undeterred, in 2012, adult stars Sara Jay and Angelina Castro took up the #TeamBJ torch promising all their followers BJs if the Miami Heat won the NBA Title. Several high profile media appearances resulted such as the Russell Brand show on the FX Network and the NBA threatened legal action. The Heat won the title. Sara Jay & Angelina delivered on their promise (releasing a DVD and streaming the event live as proof).  Two years ago, in 2014, #TeamBJ returned for a third tour of duty as Sara Jay and Siri stepped up to promise BJs to all their followers if Germany won the World Cup. Germany took home the trophy and the girls delivered on their promise (releasing a DVD and also streaming the event live).

This is the 4th installment of the mega popular series.

Cuban American Castro is a frequent guest on mainstream Spanish media outlets. Among other things, Castro was the first adult star ever to make a morning appearance on Telemundo.  She also co-hosts a popular talk show ”SOS” (Sex or Sexy) on Miratv.tv.

Known for her large 32G all-natural chest and based in South Florida, Green got her start in adult with PinUpFiles.com & Score. She has shot hardcore content for Scoreland, Reality Kings, and Naughty America among others. Both girls are part of the VNAGirls.com network.

Castro is quoted as saying: ”#TeamBJ is one of the highlights of my career. It was a thrill to see all my followers go literally nuts. Anyone who follows my social media knows I am not a big fan of Trump. He’s against us ‘nasty women’ and isn’t exactly friendly to the Spanish community. I thought it would be fun to take what has been a divisive election and put smiles on peoples faces. The elections suck. What better way to bring the country back together than BJs?! As Trump would say, ‘Believe me… this will be huuuuuge’.”

Maggie Green is quoted as saying: ”This is my first ever #TeamBJ so I have no idea what to expect. I am nervous and excited at the same time. I can’t believe Trump will win the election so follow me on twitter… it will give you something else to think about when you are casting your ballot for President this year!”

For those counting, Castro currently has 209,000 followers and Green has 78,000 followers. Angelina jokes: ”A vote against Trump is a vote for BJs. It’s a win win and might help stimulate the economy.” 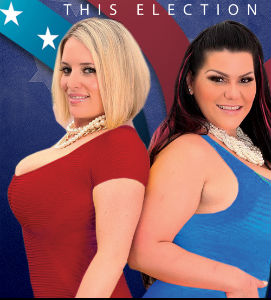 To qualify for a BJ fans must follow both Angelina Castro & Maggie Green on Twitter and vote against Trump. Details on how to collect the BJs if Trump loses the election will be posted on TeamBJ.com three days after the election day. The girls are tentatively planning Inauguration Day to deliver on their promise.

Castro jokes: “You DO have to vote against Trump but don’t take any selfies like Justin Timberlake in the polling booth! THAT.. would be against the law.”

No spam, notifications only about new products, updates.
PrevPreviousBucharest Summit: The Top Festival Of The Industry
NextYNOT Party Austin: Everything’s Bigger in TexasNext
On Key