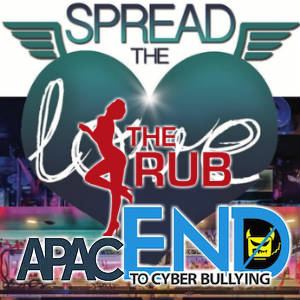 (Los Angeles, CA) April 14, 2018 – Bullying is a topic that Erika Icon, Publicist and Owner of The Rub PR, takes very seriously. That is why The Rub PR is a sponsor for APAC’s #SpreadTheLove party taking place Thursday, April 19th.

With proceeds going to both EndCyberBullying.org and APAC, this event is a must for anyone in the industry. #SpreadTheLove is open to the public, as well as the industry, and can buy tickets via Eventbrite at https://www.eventbrite.com/e/spreadthelove-tickets-44436281113. Industry members can get a special code for discounted tickets by emailing APAC at apac.information@gmail.com.

“We were one of the very first sponsors – the minute it went up on social media, we were on board,” says Icon. “I wasn’t going to say anything, but I’m hoping other companies will join in and sponsor this amazing event. Bullying is a huge issue not only in our industry, but also in society, and it really needs to end.”

#SpreadTheLove is taking place at Station 1640 located at 1640 North Cahuenga Blvd. in the heart of Hollywood. The party starts at 9pm and will feature live DJs, a red carpet, and VIP seating areas with bottle service.

About The Rub PR

In 2008, Erika Icon started, The Rub PR, a full-service adult PR agency that works with the top studios, companies, performers, and cam and clips models.

The Rub PR has promoted their clients and brands effectively and brought them into the mainstream arena, including getting client Kimber James cast on E! Entertainment’s Botched. Icon and her team have scored clients interviews with Cosmo, Cosmo Latina, Elle, Refinery29, Vice, Playboy, The Daily Beast, and many more.