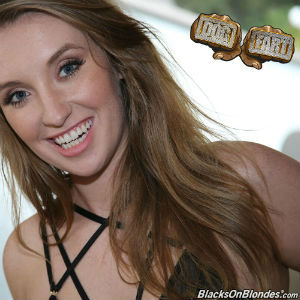 (Los Angeles, CA) January 29, 2017 – Ass-tastic beauty Harley Jade made her first appearance on Dogfart Network‘s niche site BlacksOnBlondes, and, according to a Dogfart rep, “what a debut it was! Currently a Top 5 scene, Harley’s tight white pussy is no match for Flash Brown’s BBC!”

With Flash Brown, Dogfart thought they’d given her the size she needed in order to be fucked properly.

“As soon as Flash dropped his pants and Harley saw all 11 inches, she was on her knees like a good little white slut.”

What followed can only be described as “an interracial fuck-fest that will surely keep Harley from wasting her black-owned pussy on a white boy ever again.”

“I had an amazing time in my Dogfart debut,” said Jade. “Who could say no to
working with Flash Brown? Billy and Doron were awesome, I hope you
enjoyed watching me get my pussy stretched and taking Flash’s load in my
mouth.”

Check out the NSFW trailer at BlacksOnBlondes.com.

Webmasters can promote all 22 interracial niche sites by signing up for the Dogfart Affiliate Program.

For fans and webmasters alike, following Dogfart on Twitter can result in free access logins and great membership deals.

All media requests for Dogfart Network should be directed to Matt at pornstarink@gmail.com