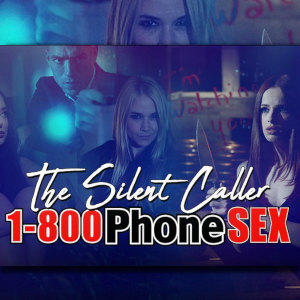 (Hollywood, CA) April 12, 2019 – Award-winning Sarah Vandella is one of the stars of Digital Playground’s star-studded, dramatic thriller The Silent Caller. The series is coming to an end with Episode 4 and get ready for a wild ride of thrills and steamy sex.

The storyline of The Silent Caller is of lonely 1-800 Phone Sex Operator Brooke (played by Jillian Janson) being stalked by a mysterious caller (played by Vandella). The stalker’s obsession with Brooke becomes an all-consuming dangerous obsession, and she feels like she’s being watching 24/7.

Vandella was previously in Scene #2 in girl/girl action with Hunter (played by Gia Page). Vandella returns for the last and final episode, a real nail-biter with everything coming to a head and the audience is wondering who will make it out alive. Vandella has a pivotal role and a three-way sex scene with Jason and Scott Nails (one of the detectives on the case).

“I hope my fans enjoy The Silent Caller as much as I enjoyed filming it – we had a stellar cast and director,” says Vandella. “You definitely want to see the series from the beginning. It’s a DP exclusive, and you have to be a member to see it.”

Watch all four episodes of The Silent Caller and don’t miss a moment of the action, suspense, and steamy sex at https://www.digitalplayground.com/series/4351674/the-silent-caller. Look for The Silent Caller on DVD and VOD later this year.

Webmasters can cash in on the full saga online by signing with AdultForce.com, or Vandella’s own revamped, relaunched official home site, SarahVandellaVIP.com, via the PUBACash affiliate program.

No spam, notifications only about new products, updates.
PrevPreviousVoting is Live for the 2019 AltPorn Awards Winners
NextSparks Entertainment Releases Double Feature on Vimeo on DemandNext
On Key